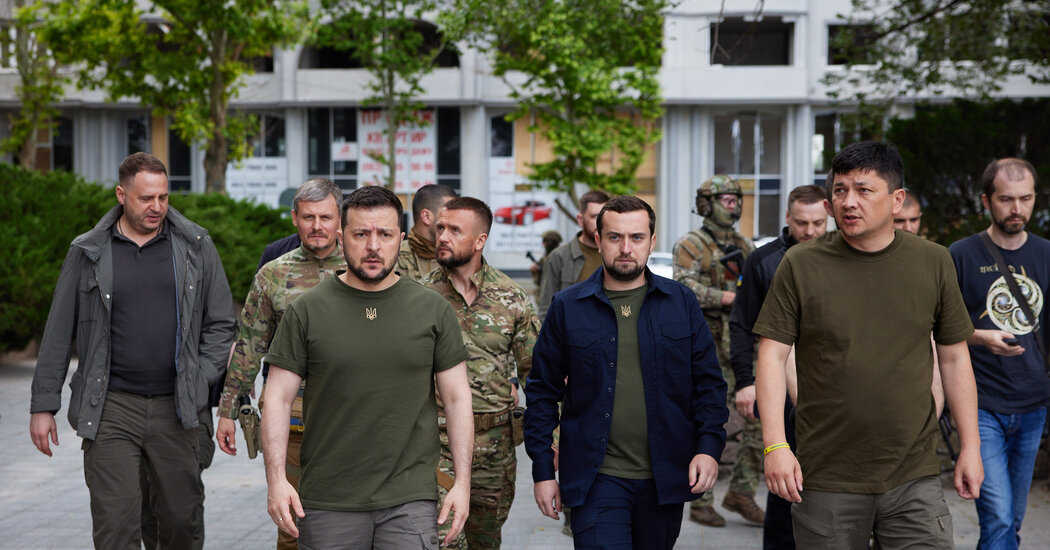 KYIV, Ukraine — Several top Ukrainian officials were fired on Tuesday amid a ballooning corruption scandal, in the biggest upheaval in President Volodymyr Zelensky’s government since Russia’s invasion began 11 months ago.

Ukraine’s cabinet ministry, which announced the firings, provided no reasons for them, but they followed a number of allegations of government corruption — including reports that Ukraine’s military had agreed to pay inflated prices for food meant for its troops — and vows by Mr. Zelensky to root it out.

The shake-up came as Ukraine is lobbying hard for Western countries to provide advanced weaponry like tanks. The German publication Der Spiegel and other news outlets reported on Tuesday that Chancellor Olaf Scholz of Germany had agreed, after months of resisting, to supply the coveted Leopard 2 tank to Ukraine, possibly in conjunction with the United States sending its M1 Abrams tank. The reports could not be independently confirmed.

But on Tuesday, American officials said that the Biden administration planned to provide Ukraine with Abrams tanks for the first time. The Pentagon also announced a sixfold increase in production of heavy artillery shells to meet the demand in Ukraine.

As the war nears the one-year mark, no issue is more critical for Ukraine’s continued survival than the flow of military aid from the United States and other Western allies — so far about $40 billion worth of weapons and other gear. Republicans in the U.S. Congress have called for an audit of how the aid is used, and some have said it is excessive and should be restricted.

Even a whiff of corruption could be enough to slow what has been essentially an open spigot of arms, and billions more in humanitarian support and financial aid. Few are more sensitive to this than Mr. Zelensky, who appears almost daily on video calls with foreign leaders and legislatures dressed in a drab green military shirt, always asking for the same thing: more weapons.

Russia is gearing up for a new offensive expected in the spring or earlier, and the Ukrainians say they need hundreds of tanks and other armored vehicles to counter Moscow’s forces and launch their own offensives to drive Russians from occupied territory.

There was no sign that the Ukrainian army’s food procurement scandal involved the misappropriation of Western military assistance, or would affect Ukraine’s ability to fight the Russian invasion. But the removal of the officials, coming amid almost daily pleas from Ukraine for more Western support, suggested an effort by Mr. Zelensky to clean house and try to reassure Ukraine’s allies that his government would show zero tolerance for graft, or even lesser misbehavior.

A deputy defense minister was among those removed from their posts on Tuesday, as was a deputy prosecutor general who caused a furor by taking a wartime vacation to Spain with his family. A senior official in Mr. Zelensky’s office tendered his resignation after coming under withering criticism for zipping around in an SUV that General Motors had donated for humanitarian missions.

Viacheslav Shapovalov, a deputy minister of defense, was relieved of his duties on Tuesday.Credit…Ukrainian Defense Ministry Press Office, via Associated Press

The Biden administration is “not aware that any U.S. assistance was involved” in the corruption allegations, the State Department spokesman, Ned Price, told reporters on Tuesday. “We take extraordinarily seriously our responsibility to ensure appropriate oversight of all forms of U.S. assistance that we’re delivering to Ukraine,” he added.

In recent days Mr. Zelensky had alluded to the corruption investigations and a coming shake-up in his government. In his nightly address on Sunday, after the authorities detained a deputy infrastructure minister, the president said he hoped that punishment would be taken as a “signal to all those whose actions or behavior violate the principle of justice,” and added: “There will be no return to what used to be in the past.”

The corruption allegations have also unsettled many Ukrainians, for whom any hint that top officials might be undermining the country’s collective struggle against Russia for their own gain is galling, especially if the corruption involves the military.

Over the weekend, a Ukrainian newspaper reported that the Ministry of Defense had purchased food at inflated prices, including eggs at three times their cost. Defense Minister Oleksii Reznikov called the allegations “absolute nonsense” and the product of “distorted information.”

But on Tuesday, Ukraine’s Ministry of Defense said that Viacheslav Shapovalov, a deputy minister, had “asked to be fired” following the reports. The ministry said in a statement that while the accusations “are unfounded and baseless,” relieving Mr. Shapovalov of his duties would “preserve the trust” of Ukrainians and the country’s international partners.

In its statement on Tuesday, the ministry emphasized that the “voiced accusations are unfounded and baseless,” but called Mr. Shapovalov’s request for dismissal “a worthy act in the traditions of European and democratic politics, a demonstration that the interests of defense are higher than any cabinets or chairs.”

Still, that it took three days for Mr. Shapovalov to step down raises serious questions about the Ministry of Defense’s commitment to rooting out corruption, said Vitaliy Shabunin, the director of operations for the Anti-Corruption Action Center, a Kyiv-based nongovernmental organization.

“A new social contract emerged during the war between civil society, journalists and the government: We will not criticize you like we did before the war, but your reaction to any scandal and ineffectiveness must be as tough as possible,” Mr. Shabunin said. “The position of the defense minister has broken this agreement.”

Also among those dismissed on Tuesday were five governors from regions that have at various points seen intense fighting, including Kherson and Zaporizhzhia. The governor of Kyiv was also dismissed but then reassigned to a position within the presidential administration.

A damaged Russian tank in the Kherson region of Ukraine on Tuesday.Credit…Nicole Tung for The New York Times

Under wartime rules, governors, who occupy appointed positions and serve at the pleasure of the president, act as the primary liaisons between the military and civilian authorities.

The deputy head of Mr. Zelensky’s presidential office, Kyrylo Tymoshenko, resigned amid criticism of his use of the donated General Motors SUV. Mr. Tymoshenko was well known domestically and internationally, often tasked with providing updates on the war. But Ukrainian journalists had raised questions about his lavish lifestyle and use of government resources.

Reasons for the recent dismissals, those that are known, vary. The prosecutor general’s office announced Tuesday that it had fired a deputy after an outcry erupted over his decision to take a wartime vacation to Spain.

The shake-up began over the weekend, when Ukraine’s National Anti-Corruption Bureau detained a deputy infrastructure minister who it said was caught receiving a $400,000 bribe from a company seeking a government contract to provide generators and other equipment.

What all this portends for Mr. Zelensky’s government is unclear. Ukraine was struggling to get control over flourishing corruption long before the invasion, and Mr. Zelensky campaigned successfully in 2019 as a political outsider who would clean house. The European Union has made Ukraine’s candidacy to join the bloc — one of his important long-term goals — dependent on overhauls concerning the rule of law, justice and corruption.

With the country now so reliant on its foreign partners, with nearly half its budget consisting of Western aid, any indication of wide-scale financial impropriety could erode confidence among donor nations. From the moment the invasion began, it has been an open question how long Ukraine will be able to rely on largely unfettered western support.

And while support for Ukraine remains high in the United States and Europe, some U.S. officials have begun to express worries about the risk of corruption in postwar reconstruction efforts, while others have voiced concerns that American weapons could be diverted or stolen for resale, though there has been no evidence of this.